highlights from broken nature and its restorative design

This is the evocative title of the XXII exhibition of Triennale di Milano, an immersive journey in the (unhealthy) relationship we’ve had with the natural world so far and the potential of design as a driving force in bringing a (much needed) change.

But let’s start from the beginning…

humans and the environment are really one single thing

The idea behind Broken Nature starts with acknowledging the fact that humans have always operated with a sense of superiority over the rest of the living world.

“We find ourselves completely immersed, along with our responsibilities as the dominant species and our culture of self-colonizers, in the unbalance, caused by the arrogant anthropocentrism that has violated and expelled from the human sphere entire parts of the living world […]”
Cit. Stefano Boeri, President at the Triennale di Milano

So what to do now? The first, fundamental step is a radical mindset shift. We need to start thinking at all the living entities as one single organism, whose parts are strongly linked with each other. From facing big issues like climate change, to apparently smaller tasks like designing a new product, this

“does not only mean finally doing our best to reduce the anthropic impact on the planet, but also abandoning the simplistic vision that continues to separate Nature and Culture, Nature and Urban”.
Cit. Stefano Boeri, President at the Triennale di Milano

restorative design: a new page in the history of mankind

To explain the concept of restorative design, Paola Antonelli (curator of Broken Nature), draws an evocative comparison with food. If we eat too much or not well, food can potentially become a threat to our health. But it can also coexist with health, pleasure and conviviality. Similarly, the idea behind restorative design is that

“after a healthy correction, [restorative design] might establish new responsible and sustainable baselines upon which to grow a vividly creative universe.”
Cit. Paola Antonelli, curator of Broken Nature

Overall, restorative design is not only giving back to the environment. It’s actually a new way of designing that allows humans to keep creating without disrupting the rest of the living world.

This can translate into practice in many different ways and the 100+ projects exposed at Broken Nature are a varied representation of it. But there’s one thing they all have in common: they all originate from observing nature, respecting it and truly learning from it.

How to better express the importance of listening to nature than to actually have visitors listen to it?

Over 50 years, musician Bernie Krause has collected more than 5.000 hours of recordings of natural sounds taken from different ecosystems, from forests to oceans. Then, the London-based studio United Visual Artists (UVA) has created a visual translation of these sounds.

Together, this has resulted in a magical installation. Entering the black room is like jumping into a natural environment filled with sounds. All visitors have to do is sit down and listen, while realizing that all those sounds are in reality the voice of nature.

The sensation in this room is to be really only a viewer, it’s like hearing a foreign language we cannot understand, but that still deserves respect. And besides being beautiful to listen to, this installation sheds light on the importance of biodiversity and calls for a more comprehensive consideration of how our actions impact the world around us.

Here is a short video I recorded showing one of the segments I’ve enjoyed the most. It’s the voice of the deepest ocean, something we don’t get to hear every day. I literally get goosebumps every single time I listen to it!

nature beyond animals: the nation of plants

If animal sounds are a language we don’t understand, plants have a silent language that is way more sophisticated than we can even imagine. Broken Nature has tackled this topic in the Nation of Plants. Curated by Stefano Mancuso (one of the leading experts in plant neurobiology), this show aims at helping us understand plants a bit better.

It all starts with a question: What do you see?

More than 90% of people say “a tiger in the forest”, putting the focus on the one tiger rather than on the many plants. This is the effect of the so-called plant blindness. But why do we give plants so little importance? The answer is twofold:

The show continues with a variety of fascinating proves that plants hear sounds, have memory, have a clear perception of their position in the space and speak both to each other and to animals. If this was not sufficient, plants actually have 13 senses beyond our 5: they can feel electromagnetic fields, measure soil humidity, and much more.

What makes plants so different from animals (humans included) is that their senses are spread across their entire bodies. If we have ears to hear and eyes to see, plants hear and see will all of their body. This may seem an unimportant detail but it actually means that plants can survive without any functionality loss even if they lose 90% of their body!

Besides highlighting features of plants we’re not really aware of, the Nation of Plants reminds us that plants have been around for much longer than humans and that they’ve always been able to find strategies to adapt in a way that is efficient and does not harm the surrounding ecosystem. We should definitely learn from plants, taking them as a model to help us face our future challenges.

In practice, restorative design can be many different things. Below are a few interior design-related examples out of the many that inspired me at Broken Nature.

Among the rest, circular design means seeing everything as a resource and upcycling waste into new valuable objects. This is certainly a sustainable way of designing that shows respect to the world by not filling it with trash.

For example, audio cassettes used to be a big thing, but now, they’re pretty much just trash. Textile-designer Scott Bodenner has had the genius idea of mixing recycled cotton, wool, linen, silk and rayon with cassette tape. The resulting fabric – Mixtape – has a touch of shine to it, plus it gets rid of a pile of trash very elegantly.

Similarly, Studio Swine has designed a portable foundry powered by cooking oil that melts aluminium cans and gives them a new life. The Can City project was inspired by a traditional figure in São Paulo: the catadores. These are people who collect recyclable waste from the streets and transform it into gorgeous pieces of jewellery and furniture.

Restorative design can also help to save and foster natural biodiversity. For instance, there exist many different types of corn that grow in Mexico. But they’re in danger, because they’re constantly replaced by genetically modified crops. A design reaction to it is offered by Fernando Laposse, who has used colourful husks coming from native corn types to create a veneer material. With its stunning colour variations, Totomoxtle can be used for the most various applications and – at the same time – it gives a whole new value to less known native crops.

The living world is made of many interconnected components. Aquaponics is one of the many ways design has been inspired by this. In aquaponics, fishes and plants live together: fish “waste” feeds the plants, who purify the water that can go back to the fish keeping their environment clean. Aquaponics may seem a very lab-like activity, but with Local river, Mathieu Lehanneur has created a home aquaponics system that decorates the space with natural elements while allowing people to grow food.

As a note, growing food at home is another very actual topic and may soon become a necessity given the latest growth population forecasts. So we do need elegant solutions to bring food growing at home!

To conclude our journey around Broken Nature; there are actually two ways to look at this exhibition. Someone has described it as the documentation of an “irreversibly compromised bond” between men and the natural world, saying that all we can do now is make the extinction of mankind a bit more elegant. But to be honest, I just can’t look at it this way. I prefer to embrace the it’s not too late perspective, in which restorative design is a radically new way to look at design as a whole, a way that acknowledges and respects the existence of all life forms on this planet! 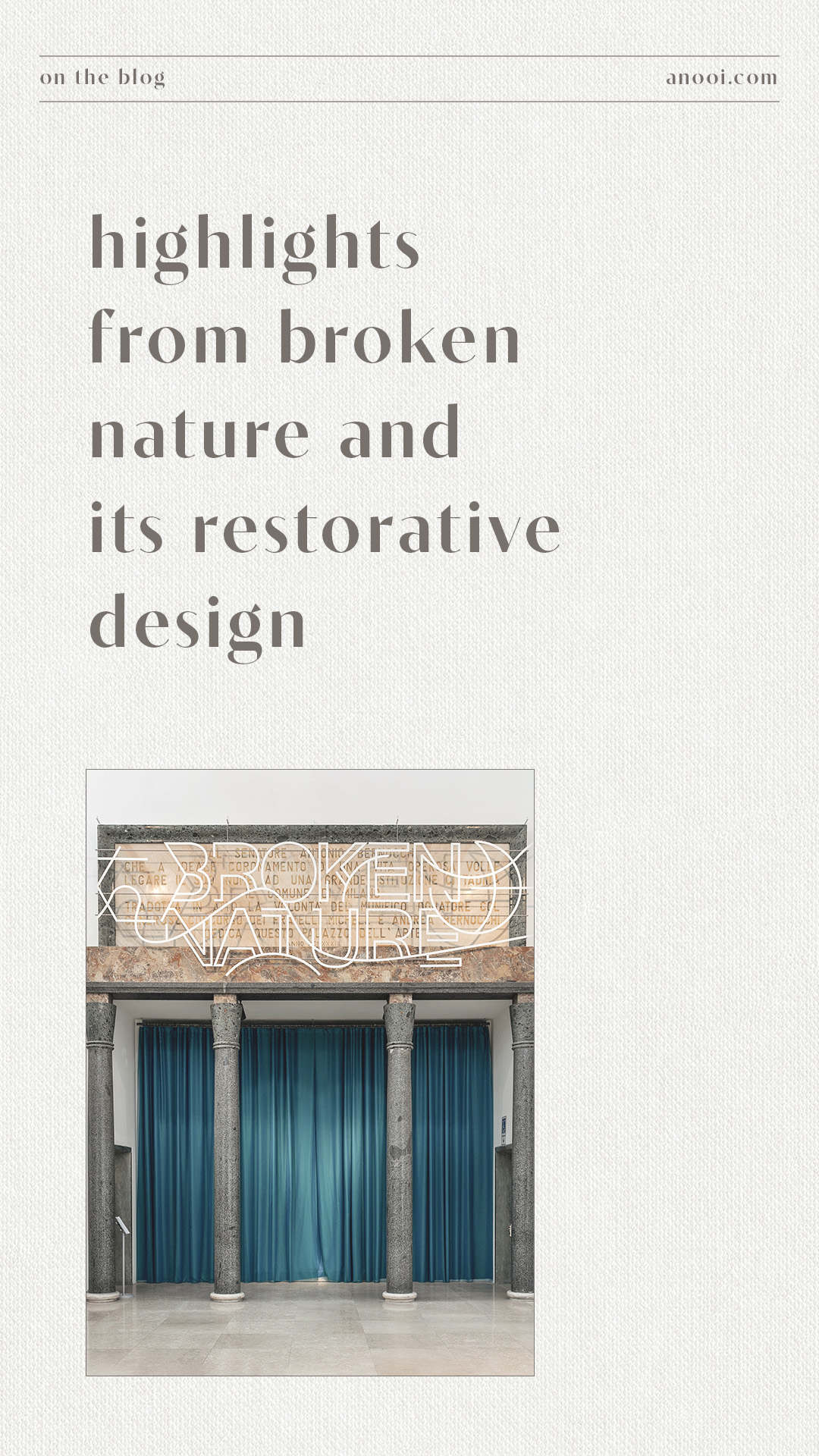